﻿​Lawrence is pretty much a self-taught artist. His first experience with painting came when, at age three, he sneaked into the garage and found a brush and an open can of black enamel paint next to his daddy's brand-new white Buick. The dramatic repercussions of this adventure lasted quite a few years, and for years Lawrence was only allowed washable finger paints. Eventually, though, at age nineteen, he was able to wheedle some pencils and paper from his parents, and he soon discovered the almost unimaginable luxury of the 48-color box of crayons. His first actual painting was a paint by numbers kit, with a desert southwest theme. Something in this scene stayed with him, because, although he was raised in the South and in Texas, he ​has always had a love for the western landscape (as well as a love for the  western lack of cockroaches and excessive humidity). 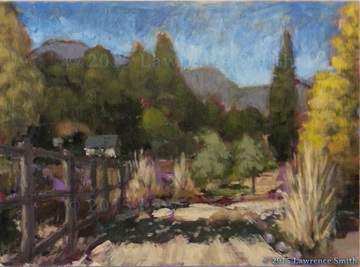 ​Lawrence does work in pastels from time to time, and in graphite, charcoal, and Conte crayon, but he works primarily in acrylics because with acrylics mistakes can quickly and easily be painted over, which in his level of ability is a definite plus. Also, since they are essentially plastic, acrylic paintings have the added advantage of being usable as place mats. 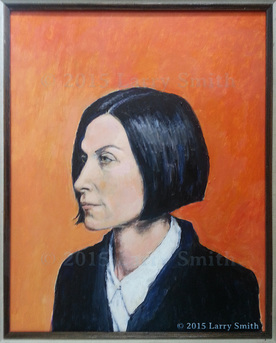 ​In addition to painting and drawing, Lawrence is addicted to the passion and grace of Argentine tango and is forever trying to develop an acceptable enrosque. He is also a dedicated finger-style acoustic guitarist, and practices several times a year. He has mastered three chords, and has begun to attempt a fourth, which he is fairly certain is a C. 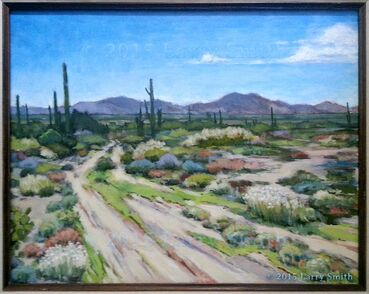 When not drawing or painting, or trying to get the enrosque right, or searching for that C chord, Lawrence lives quietly in Reno, Nevada with his collection of stuffed marmots and discontinued German umlauts.

(Okay - some of the above might be stretching the truth a bit - for example, his daddy never had a white Buick. But Lawrence does have umlauts. Bags of 'em, all sizes.)
Proudly powered by Weebly